GIODN Special Event – What is OD’s North Star? – It’s the Discovery and Design of Positive Institutions with David Cooperrider 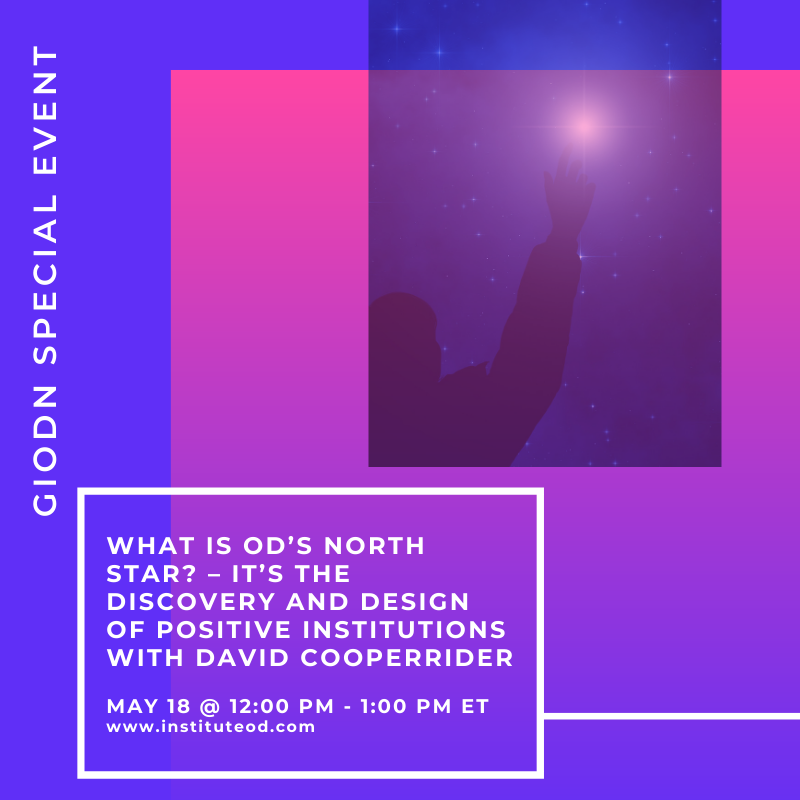 In this special GIODN keynote, David Cooperrider, explores the proposition that the quest for a flourishing earth is the most significant organization development opportunity of the 21st century—and that when people in organizations work toward building a more flourishing world they too are poised to thrive in ways that ignite innovation, leadership development, and inspired workplace performance.  Put another way, being a great corporate citizen “out there” is not only about serving external stakeholders; it is fundamental to bringing out the best in people inside the firm. Sustainable innovation and human wellbeing elevate each other and thereby raises a far-reaching exploration: what is the link between advancing sustainability for a flourishing Earth, with the simultaneous flourishing of the human side and economic success of enterprise?  And how might the discovery and design of positive institutions shed light on this natural dynamic? How, precisely, might an organization’s quest to “do good and do well” bring out the best not just on the “outside”—helping to advance a better society or world—but also bring out the best on the “inside”— creating intrinsically inspired engagement; propelling supercooperation; and calling forth extraordinary levels of achievement?

Every global issue of our day is a business opportunity in disguise. But exactly how do organizations turn our greatest global challenges into tangible, even surprising, new business opportunities? Using data from over 4,000 interviews into “business as an agent of world benefit” as well as Appreciative Inquiry with industry-leading stars such as Apple, Johnson & Johnson, Interface, and the thousands of organizations part of the UN Global Compact, David Cooperrider points to a colorful array of real-life stories and OD cases, but all of this with just one overarching conclusion: there is nothing that brings out the best in any organization faster, more consistently, or powerfully than bringing “the whole-system-into-the-room” to design win-win-win solutions to our world’s great global challenges.

David calls this dynamic “mirror flourishing” and shows how the design of positive institutions is OD’s ultimate North Star. Using his 3-circles of the strengths revolution as a guide, David provides a complete strengths framework uniting the latest in positive psychology research, sustainable design and strategy, and the Appreciative Inquiry Summit method.

What David is envisioning is a watershed moment in OD research and practice where our field moves from micromanagement to macromanagement, and then back again.  It’s an age where OD will increasingly find its most profound work on “the outside” of the enterprise and where institutions are re-defined not as clients but instead as the change agents. And then the reverse flourishing paradox unfolds. The more successful our macro OD becomes (for example helping a Tesla Motors electrify the renewable energy age) the more powerful our micro impact will become (creating a more magnetic work environment with “hot teams” and a culture of innovation emerging from everywhere.)  Just as over 700 studies document how “good things happen to good people” a similar dynamic can happen when organizations emerge as positive institutions changing our world for the better. So now you’ve been asked to help design an OD project to improve the engagement scores in a low morale culture.

David L. Cooperrider, is best known for his founding theory and research giving birth to Appreciative Inquiry– or “AI” as it is now known around the world. Today AI’s approach to strengths-based and life-centric– instead of problematizing organization development and deficit-based change– is being practiced everywhere: the corporate world, the world of public service, of economics, of education, of faith, of philanthropy, and social science scholarship—it is affecting them all. Cooperrider is a Distinguished University Professor with two endowed chairs, including the Covia—David L. Cooperrider Professorship for Appreciative Inquiry, at Case Western Reserve University’s Weatherhead School of Management. David serves as an advisor to heads of state, governors, mayors, UN Secretary Generals, and CEO’s throughout the world, including projects with five Presidents and Nobel Laureates such as William Jefferson Clinton, His Holiness the Dalai Lama, Kofi Annan and others. The recipient of “The Lifetime Achievement Award” in the field of Organization Development, the Peter F. Drucker Distinguished Fellow Award, and named as one of the nation’s top thought leaders by Trust Across America, Cooperrider is author of over 20 books, among them the five-volume series on Advances in Appreciative Inquiry. Jane Nelson, at Harvard’s Kennedy School of Leadership recently wrote, “David Cooperrider is one of the outstanding scholar-practitioners of our generation” and, for the opening of the new David L. Cooperrider Center for Appreciative Inquiry at Champlain College, Marty Seligman wrote: “David Cooperrider is a giant: a giant of discovery, a giant of dissemination, and a giant of generosity.”